Originally posted on another platform in November 2010.Fifth post of our 3 month tour around Asia

Following our stint in Singapore, we had to move on and consider our next stop. Originally, we were going to go to Indonesia and then onto Philippines. The reality is that there was a severe warning for all of Indonesia, so we settled on skipping it and going to Manila directly. David has family there, so we were looking forward to catching up and staying in a normal house for a couple of nights. In true backpacker style, we chose to take a bus to KL from Singapore instead of flying out from Changi airport – not only it was cheaper to do this, but also we saved a night’s accommodation too.

We got onto a Chinese bus at 10 pm and, as this is not Europe, we had to do a stopover in the frontier showing the end of Singapore (another stamp!) and then we drove for another 10 minutes to collect our second Malay passport stamp. We were finally able to try to catch some sleep at around midnight, albeit only for 3 hours as we had by then reached KL. Needless to say, we slept very little and having to wait 4 hours for the flight to the Philippines at the airport was a bit of a pain. We were hoping to get some shuteye during the flight, but the typical SE Asian turbulence did not help.
When we landed, we collected another stamp (yeah, new country!) while the guard was telling a fellow passenger jokes about drugs. We then were collected in Clarke by David’s cousin, Kevin. Thank God he came – Clarke is 30 kms away from Manila and Alabang is about 20kms in the opposite direction to Clarke . So we thought, great we will be there in an hour and half or so.

To say that there’s traffic in Dublin or in Palma is to be rather disrespectful to the Filipinos. What they have to deal is insane. If they have a bad case of traffic (getting stuck on a bridge or on one of those flyovers) you could be there for literally hours. I wonder what % of survival  would a person in an ambulance have in Manila. Anyway, we got home 4 hours later and we were finally able to unpack, wash (a lot) and finally take a breather of the stress of travelling.

Manila is not a city. Manila is a massive compendium of cities: Alabang, Sucat, Makati, etc, under the name of Metro Manila. It is incredibly busy and they have many varieties of local transport: jeepneys, tricycles with seats, wannabe tuk tuks and taxis. All of those, along with mopeds, rule the roads and God forbid you try to cross the street where you shouldn’t! 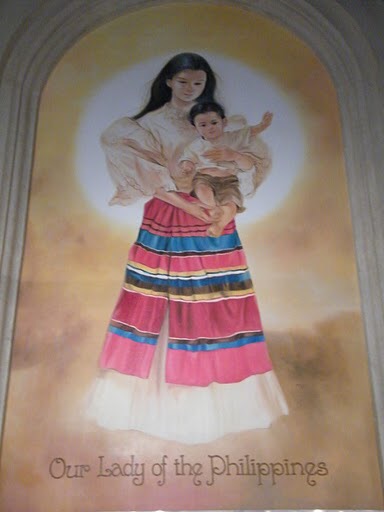 Manila is a place of contrast. The centre, Makati, is “a bit” like Manhattan: plenty of skyscraper, malls…. And more malls! They are so popular that there’s mass in each of them every day and the congregations are MASSIVE! A bit weird for us to see that but I guess faith never sleeps. On the other side, Manila also has areas where you can see that there is hardship, such as Intramuros (the historical side). It is very hard for me to write this as part of my boyfriend’s family is from there but I must recognize that I saw children that were in serious need – crying, naked, dirty and alone. There were others that interacted with the tourists and sold flower necklaces… At least they looked a bit happier.

Sadly, there isn’t much to see in Manila anymore, no doubt due to some of the terrible disasters that this city has had to go through over its history. Colonization, earthquakes, typhoons, WWII (which destroyed what was left)… Really sad to see. We did have a number of very funny stories with a taxi driver, but we will tell you about them when we get home as they are too long. After some time with the family (thank you guys!!), we left Manila behind and we went travelling.

The first stop was Baguio, a very picturesque town in the north, amongst the mountains. We stayed in an incredible hotel where David’s uncle has some interests and… well, what can I say!! After some time in hostels, it felt incredible to be staying in a suite of a five-star hotel! So unexpected and, to this day, so grateful! Service was amazing and it was a real treat to have dinner in a high-end sit down restaurant after so long.

Speaking to the waiters about how to best get to Banaue (where the rice terraces recognized by UNESCO are), they kept on telling us that may be it would not be a good idea as it was going to rain. We checked with another one and he also suggested that perhaps it would be best to stick around. We were sort of laughing to ourselves because we were used to living in Ireland, where heavy rain is an everyday thing and we totally forgot about it…. Until we went towards our room, where we found  a newspaper with an alert for a typhoon strength 5 (one of the strongest) to hit the whole of Luzon late the next day. Needless to say we jumped onto a bus towards Manila, where we got to 12 hours later. This Typhoon was christened as Typhoon Megi and caused $709 million in damage in South East Asia.

Once we got to Manila, we got to the family home in Alabang and started working on the itinerary for the rest of our time in the Philippines. Thanks to June, we knew how to divide our time and where to go.

Cebu is the second most important city in the Philippines. It was also where the spanish arrived and where they killed Magallanes. In Cebu, we saw the coal market (still called as such even if there’s no coal anywhere in sight), Magallanes’ cross, the Basilica of the holy child (the statue of the child was surrounded of neon lights – very Jesus Christ Superstar) and we also saw the fort. We stayed in a very Spanish looking place called Casa Escano, an old popular home converted in a B&B, which had a very nice menu with a lot of old school Spanish items. Sadly, we only stayed 2 nights in Cebu: the first one when we arrived, and the second on the way back from Bohol. Cebu had a lot of palpable history, but this was almost drowned by its heavy traffic and the “interesting” crowds that come out to the street after 6pm.

Bohol is very different. We took a catamaran from Cebu to Bohol (the ride was hell as the sea was rough due to the typhoon) and when we arrived to Tagbilaran we had nowhere to stay. This was strange, as we  had always booked everything at least the night before. We had heard so many great things of the tourism office in the port that we thought it would be OK to risk it. Of course, it had to be close the day we arrived (Murphy’s law) and so we changed plan: we went to McDonalds (they have wifi) and we reserved a cool looking place called Alona Beach.

Alona Beach was on the smaller island connected to Bohol through 2 bridges. It’s a great spot with many hotels and resorts, including ours, which was cheap as chips. Our own bungalow with a swimming pool for $12/night altogether. Boom. On top of that, the beach was a 5 minute walk away. Definitely, a great place considering it was positively boiling hot.

In the hostel, we were able to organise a tour to all Bohol attractions:

As part of the tour, we also ate at a floating restaurant (our third one), which was a great experience. They had a band which sang Beatles songs using their own interpretation of the lyrics The best one was the “freestyle” version of Rhinestone Cowboy : “na, na,na, na, cowboiii…”

Filipinos LOVE music. They know the majority of the lyrics to all songs (I almost had a GLEE moment with a cashier at a supermarket) and they ALL go to karaoke all the time. While staying in Alona Beach, I could sense Freddie Mercury crying in his grave when 2 filipinos started murdering Somebody to Love. That’s what I love about them, they know how to have a good time, they are kind and they smile all the time. Of course, they also know how to do business, if you don’t haggle in the Philippines, you will be paying twice more than you should, quite frankly.

After Bohol, we went to Palawan (via Cebu). Palawan is one of the largest islands and is geographically speaking closer to Malaysia than to the Philippines. Puerto Princesa (its capital), is stuck in time: it does not have traffic or shopping centres. Having said that, Manila would love to be as clean as this city: throwing something on the ground incurs a fine of 200 pesos. Do it again and you will pay 300. Do it again and you will pay 1000. Care to do it again?  OK, jail will be next for you, my fried. The locals are very proud and work hard to ensure the place remains clean. The major has been in power for quite some time and while we were there, he was approaching yet another election. He had signs with pearls such as : “The inhabitants of Puerto Princesa must maintain their fear of God and the consequences their acts may cause”. To be fair, this was also the first place in the country where we did not really see weapons and where I felt completely safe.

Palawan is a cool place, but the best is its people. We had just arrived and we got into a tricycle to our hostel (Banwa Art House). We went out and ten seconds later, children walked to us (note walked, not ran) saying “hello”. They asked us questions of where we came from and one of them told us very proud that she was muslim. They had a genuine interest in why we had visited their town and were appreciative that we had.

The hostel was quite cool and had the best banana smoothies ever but the first night in the hotel was hell. We were in a very small room with no aircon, just a fan and the mosquito net would get in my face whenever I breathed in. I had the same issue the second night but on the third, the owner of the hostel told me he had a bigger room – it felt like a suite to me… I slept like a log.. One of the evenings, we met two Spanish guys that had been travelling for 13 months. They had been almost everywhere and had really good stories, including one of how they crossed from Tibet into China… I’ll never forget it.

Whilst in Palawan, we also went to the underground river and we also did an excursion to go island hopping. It was absolutely incredible and the snorkelling was amazing… Amazing was also the state of our backs following our sunburn….More SPF next time, lesson learned.

After Palawan, we had just a couple of days left in the Philippines. We chose to fly back to Manila and do some admin, mainly organise Vietnam and upload over 1500 photos from the trip until then. Sadly, I stuck an 8GB card on a very slow laptop, which stalled and corrupted all my pictures and videos. I almost lost it. Luckily, the shopping centre in Alabang had a shop that helped with this kind of thing and the guy retrieved ALL my pictures. The videos died, but what can you do…

We left the country with appetite for Vietnam and knowing that we would have to make it back to the Philippines to see all that we were not able to see and to once again catch up with the family.