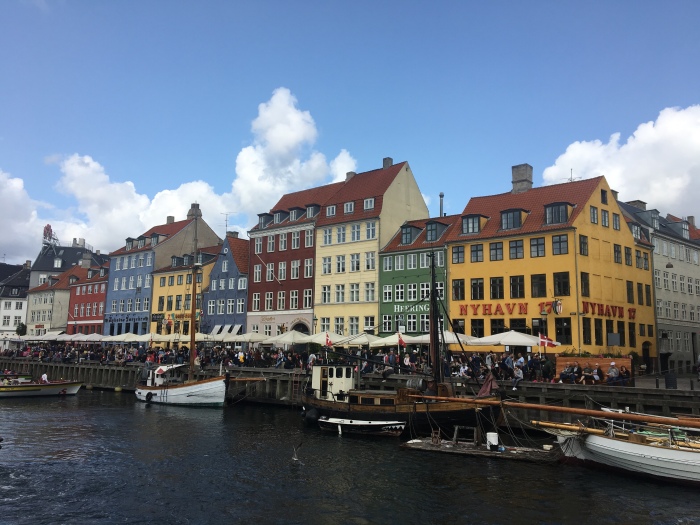 I believe this may be the quickest post into my blog of all time. I’m out of Copenhagen a total of 20 minutes and, since I’m going to spend the next 5 and a half hours in this train, I might as well get cracking.

We arrived on Saturday morning, bright and early. The arrival, was pretty impressive, with some islands below the clouds, the grey in the water and a bit of green in places. Also, very flat. Getting out of the airport was a doddle too: one train into town and that would be all. Well, there was the minor thing of having to adjust to the Danish way of thinking.

So how are the Danes? In actual fact, pretty organised, even if it is within their own organisation. Let me give you an example: you want two tickets for the metro or the S or the bus? No problem. Just don’t be surprised if there are only 2 papers and 1 has the receipt and the ticket with it. Note to anyone visiting Copenhagen, please download the DOT app – it’s super easy to use and you can get multiple tickets in it and they are all timed -yes timed- so that you don’t take the advantage of the system.

The Danes are also pretty matter of fact. Their excellence in practicality has made them a bit, well, unable to sell themselves and what’s great about them. Casing point, 2 guides we encountered. The first one, was part of a large multi country company that offers free tours (12 and counting here) . She was very charming but vastly undersold the city, in my opinion. I walked away from the tour with the following information: the city burned 2 or 3 times, taxes are high for the greater good and it took the nazis 2 hours to take over the country. The second guide ( on a 1hr boat tour) spoke to us about cranes, new buildings of no importance and other minuscule things.

Why oh why, would someone with a beautiful capital city with tons of history talk about the city that way? Why not talk about the vikings, the time that Denmark ruled (yes, ruled) Northern Europe?. I was very confused when it suddenly hit me: Showing off is the worst thing you can do in Denmark. Period.

So let me tell you here what I should have been told on these tours. Copenhagen was a Viking fishermen’s village and it’s is thought to be a “young” capital in European standards as it was founded in the 11th century. The town was catholic from the 12th century until 16th century and during that time, it raised to prominence within the Nordics, becoming the capital of Denmark and opening its first university in the 1400s. Impressive, right? Read on.

Copenhagen grew substantially on the 16th and 17th centuries and they even built the stock exchange for trade. The east India company wad also founded then to support international trade. It is in the 17th century that a king decided to build Christianhvn, which resembles Amsterdam. By the end of the 17th century, Copenhagen was the capital of Denmark and Norway and everything looked hunky dory…

Well… I’m afraid it was not to last. The 18th century was terrible for the city. The plague came first and was followed by 2 major fires which destroyed the majority of the city and left almost a quarter of the population homeless. A lot of rebuilding had to be completed, which explains why Denmark had to claim neutrality on a lot of European wars of the late 18th century. On the 19th century, Copenhagen was attached not once but twice by the British, who destroyed most of the city. Despite this, the 19th century saw the Danish golden age and the expansion of the city.

The 20th century saw Denmark as neutral in the WWI ( it also saw it make a couple of quid of trading with both sides). The 30s were problematic with housing problems and, the 40s were to be no better with the invasion from nazi Germany. The city and the country were only to be liberated in 1945. And from then until now, the Danes have been working hard at getting the city to the best of the standards: more bicycles, less co2, smart transport, expansion of the city and, these days, reusing old buildings.

I may only have been there for 2 days, but I experienced a bit of everything, going to mention just some of the things I did:

1) Nyhavn, the beautiful, postcard like waterfront in Copenhagen. Yes, today it is beautiful, in the old days it was the seediest part of town, just like any other harbour. The houses there are indifferent coloursm very handy for when people were buckled, I am sure.

2) Christiania, a “Woodstock like” part of Copenhagen. I say this because the Freetown of Christiania was created in 1971, when some students took over some old barracks and settled there. The setup is quite interesting: it’s an anarchist commune and you have to apply to a council for a house there, they will review your application and give you access of successful. Whenever you want to leave, you can’t take anything with you. Their idea is to be “a self-governing society where everyone holds themselves responsible over the well being of the community”. Realistically, they took the land from the Danish defence ministry and they did not pay for water, electricity, etc until 1994. They did not purchase the land until 2012. They have an open cannabis trade (and I mean OPEN, there are people with tables openly selling) and there’s graffiti everywhere. To be honest, I found the place to be hipstery and unappealing.

3) The streets in the centre: yes, I am lumping them together. One of the pleasures of copenhagen is to simply walk around. Interestingly, there were parts that reminded me of Prague, others of Amsterdam… all beautiful, all the same.

4) Kodbyen : also known as the meat packing district. Starting as a cattle market in the 17th century, the place has evolved into abattoir first and restaurant heaven today. The area still holds all the old buildings, these have simply been worked on to allow for restaurant operations. We had a great time in there and you could see a lot of locals going there too.

5) Canal tour: take the 1hr one that’s 50kr.Honestly, don’t pay more for the same, Copenhagen is expensive as it is. The boat ride is cool, entertaining, and it allows you to see how the city is laid out.

My favourite thing, however, was the food. Holy cow. Our first meal was smørrebrød and it was phenomenal. Spegelpose, curried herring, salmon and dill, cured herring, Danish shrimp with egg…. I loved all of them. I ate a lot of other things too, but this was hands down my favourite.

Now it’s on to the cool train that goes into a train that crosses the North Sea.

But I’ll tell you about that some other time

There was an error retrieving images from Instagram. An attempt will be remade in a few minutes.

There was an error retrieving images from Instagram. An attempt will be remade in a few minutes.