Originally posted on another platform on September 2010

After three nights in Bangkok, we flew to Phuket (short 1hr flight with Bangkok Airlines – nice!), where we were collected by Paul, who had joined us earlier in Bangkok. The moment we landed, we could feel the difference: within the hour we had gone from one of the busiest cities with a considerable level of air pollution, to amazingly clean air and beautiful beaches. The landing was absolutely stunning – all these little islands on the coast… It felt like we were in a movie. Paul lived in Khao Lak, which is just a short drive away (1 & 1/2hrs), so we quickly  went on our way.

Khao Lak is a quiet resort, with an amazing beach and small restaurants and cafes where you can have a sumptuous meal for very little money. I honestly could recommend all of the,!! Jane Issan (laarb ghai!), The Candle (a little bit “posher” from a backpacker’s perspective), Walker’s Inn (amazing hangover cure breakfasts!), The Blue Elephant (masaman curry!)… It’s so easy to find good quality food when you eat out in Thailand, that people no longer spend many evenings eating in anymore. I must confess, however, that we were incredibly lucky in Khao Lak, as Paul and his friends showed us around quite a lot and we were exposed to amazing food and drink! Thanks Paul, Philip, Pasieu and Zurine. 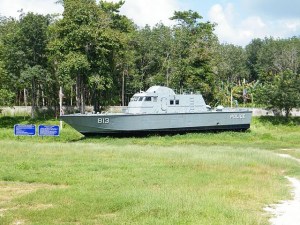 All of the Andaman Coast (Khao Lak included) was really affected by the tsunami. So much so, that every single place that we visited had its own “tsunami hazard zone” and ts own tsunami museum. They also have these strange-looking buildings with massive columns on the bottom and an open plan floor with a roof at a height of 2 or 3 stories. These were built after the tsunami as a meeting point for all inhabitants: if a tsunami was to hit the Thai coast again, they should offer shelter. The strength of the sea during this phenomenon is truly scary and I can share with you an example: there’s a police boat in Khao Lak that was brought in from the middle of the bay well into the jungle… And you can still go and see it today as it has not been moved by the authorities: it’s still 2 and a half kms inland. It’s really sobering to see it today.

Even if we spent quite a bit of time in Khao Lak (thanks Paul for 2 amazing weeks!), we did make the most of it. During the day, we would go to the beach or for a walk, at night we would go out for dinner with the guys. Thai food is amazing: mango salad, green papaya salad, penang curry… Who could resist?. One of the best things we did was a very special boat excursion. Paul took us to this totally remote place with an entrance to a very quiet river. There, we met a team of men who helped us navigate it. The river had snakes, vines, spiders… Everything! That’s why they call it “Small Amazon”. I was so in awe that I made a video of us going through it a- la- Richard Attenborough, sadly it got deleted by error. We got down to the estuary with the boats, where we had a swim and went back to the starting point.  I still think that we must have been some of the few “farang” that went up that way.

We also visited a cashew nut factory that same day. Well, the term factory does not really apply much in my opinion. It was more of an artisan’s shop and I absolutely understand why they are so expensive to buy back at home. Basically, the cashew is inside a shell (which is also inside a fruit). These have to be open by hand, one by one, being very careful not to break any of them (the workers are not paid the same if they do). The “factory” had around 20 people who were clearly of very humble background, yet they were happy to share nuts with us. We bought quite a lot of cashews before we left and thanked them for their time.

Paul also took us to what is considered the area that was the worst affected by the tsunami. Ban Nan is right by the coast, at sea level, an incredibly flat part of Thailand, where they had no chance against the big waves. Nowadays, they have a museum showing the before and after (horrific) and a monument in honour of the deceased. It consists of 2 beautifully blue ceramic waves, where you walk through to see the names and pictures of the dead…. Whole families… I took a couple of pictures and went through as quickly as I could – emotions were running very high.

The same day we also visited Takua Pa (which in Thai means new city). I absolutely loved this place. At first glance, it had nothing that would stand out, it looked like a simple colonial town where the population was definitely not used to seeing foreigners. School kids stared at us when they came out on break. One of the things that did have an impact on me was the little coffee shop we went to. The owner must have been a little over 60 and the place reminded me to one of those Cuban cafes that can be seen on movies; with high ceilings, big fans and completely open plan. The owner had pictures of herself in her 20s on the walls and had been clearly saving interesting items, such as old food cans, bottles and glass jars. The place had a lot of character and I absolutely regret not having taken any pictures – not sure why I got that shy!

We also did the obligatory elephant tour (another method of transportation). An experience and an incredibly big business in Thailand… I am not quite sure how I feel about that today.

After 2 amazing weeks with Paul, we moved on to Koh Phi Phi, well-known for 2 things: 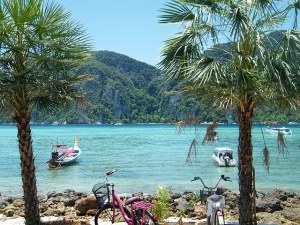 Phi Phi is small and resembles a Caribbean island; being the nerd that I am, it really reminded me of  the island in the game “Monkey Island”, with the bay on one side and the mountain in the background. If you are not made for the beach (like me), I don’t think you should go for longer than 2 nights, like we did. The big island (Phi Phi itself) has 2 bays: a backpacker one and a more chilled one. If they are not careful, they will end up destroying the island.

We relaxed, sun bathed, swam and went up to the viewing points. I must confess that I struggled with the first and the 2nd, but they were so worth it, the views were absolutely unbelievable. We did not go to the island on this occasion as we had not heard amazing things.

The last few days spent on this Thailand stage (we will be re-entering the country before we have to go back home) were spent mainly around preparing the trip to Malaysia. Before we left, however, we celebrated in style by attending a 600 people white party in Patong Beach, by  Phuket. It was a hotel’s 6th anniversary and the management decided to invite all those people to free food (lamb on the spit, sushi, etc) and free booze (blue margaritas)… It was an incredible night.

Last but not least, I have to admit that even though we are coming back in December, I know there are a few things I will miss:

Equally, I know there are a couple of things I won’t miss:

Thank you, Thailand, for all these amazing memories. Stay beautiful.