Originally posted on another platform on October 2010

One of the first impressions of Malaysia is that it seemed a tad more organised than Thailand… Which also means that there are a lot more rules. It also meant a change of religion and we were again in a muslim country.

Before we left for Malaysia, we saw a notice in Phuket’s  airport saying that visas on arrival would no longer be available. You can imagine our reaction to that; I was freaking out and already thinking what would happen to us when we landed…. So we decided to go through the check in process and see what happened. It went without a hitch, so we risked it for a biscuit.

When we landed, we of course had no issues going through immigration. In fact, we were provided with a 90 day free entry visa, the longest by a mile! I guess they forgot to mention in Phuket that the notice applied only to some countries. Yet again, I freaked out for nothing!

We stayed in the Reggae Guest House I, just off China Town. The room was small and with no windows (very KL – on the plus side, it means that mosquitos can’t get in) but it was super clean. The biggest difference between Bangkok and KL is the fact that KL is a lot cleaner and also a lot  more organised. It is also a lot more diverse (you have Malays, Chinese Malays, Indian Malays) and thus it is very open-minded. The first day, we woke up, took a look at the free breakfast and we decided to go out. Why you ask? Well, let me explain what a hostel breakfast consists of in SE Asia:

So, going back to the story, having seen the above we left the hostel to go for a walk and we ended up in an Indian Malay café. I had Nasi Goreng for breakfast and David had a curry with rice. It was gorgeous and super cheap. 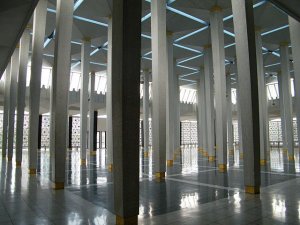 Those that know us, are very much aware of how much David and I like walking, so we decided to go on an expedition of KL right after breakfast. In one morning, we saw a Chinese Temple in the middle of celebrations, an Indian temple, the old train station, the national museum (sometimes one must add to one’s culture) and Masjid Negara. To go in, we were given  a tunic, we had to go through heavy security and give all your details. When I wrote mine, in the hometown section I wrote Madina Mayurka, which was Majorca’s name during Spain’s Arab period. The guard was well impressed and asked lots of questions about Granada, Cordoba… He even allowed us to peep into the praying room, which of course can only be entered by people in the Muslim faith. The guy was very nice.

That day, we also went to the KL Tower, where we saw amazing views of the city, including the mind-blowing PETRONAS, the Royal Palace, the stadium where independence was declared, etc. As you can imagine, after walking all day we were absolutely EXHAUSTED and super warm, so we decided to go into Times Square, a shopping centre. The reason was simple: AIR CON. We checked out a couple of shops and we realised we were in a mega mall, there must have been 2000 people there easily. 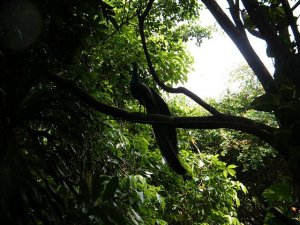 The following day, we started planning how to  get to Penang and we also went to the Bird Park, which is an “open” space in the middle of KL, where birds roam and fly pretty freely. There are many species, and I had a great time… until one of the birds shat on my right shoulder. You should see the photos. There was also a show, were I had another bird take liberties with me, in this case an imperial eagle decided to “fall” on me… Lucky me I guess, haha

I noticed that I have not yet mentioned the most singular factor about KL: in this city, the jungle is the number 1 inhabitant. In KL (and the rest of Malaysia) all cities and towns were created when gaining territory from the jungle and even in old cities, this is something you can still see today – the jungle is still trying to reclaim KLs centre; for example, you can feel huge roots on some road patches and some greenery in the pavement. Thank God at some stage they decided to keep green spaces, the bird park being a  perfect example.

After all the birds, we went out for lunch and saved the rest of the afternoon to go and see the fabulous PETRONAS Twin Towers. We jumped on the metro and took the exit that our guide indicated and when we came out we saw this massive shopping centre, which was connected to the station. I think it took us a good hour to get out and look up, only to realise that we were at the base of the towers (and that we had been all that time). They are amazing. Mind blowing. After a number of pictures that will never do justice to the place, we left to go for food to Little India and to pack – we had an early start to get to Penang in the morning.

We had reserved 2 seats in a luxury coach called NICE in KL’s old train station. When we bought them we laughed at the name, thinking that they were going to be completely the opposite. After all, we had paid very, very little. Turns out we were wrong. Very wrong. All of the people on the bus were originally from the UAE or Iran and were Prada or Gucci clad. We felt a bit inadequate in our backpacker gear, but thoroughly enjoyed the comfort.

Four and a half hours later (snack included), we came off the bus in Butterworth (we were the only ones that did), to get onto another bus that would take us to the port to take the ferry to George Town (Penang). We later found out that the original bus we had been in could have taken us to Penang for double the price. To be honest, I don’t mind  today as the “ferry” was amazing.

Anyway, once we got to George Town, we stayed in Chinatown (again!), in a small place called Red Inn in Love Lane. It was another room with no window but with an amazingly comfortable bed. The room had also an interesting collection of books, such as the 1997 Time Magazine Year book and an English – Tagalo dictionary… Clearly a backpacking hostel!

George Town was declared a World Heritage site by UNESCO in 2008 and is a place with a lot of history. Some people don’t like the city because it’s not modern; that’s exactly the reason why I did. The importance of this town from a geographical perspective (by the Melaka straits) meant that its port became very popular through the years. Today, you can see an eclectic mix of colonial architecture. What I liked the most, however, was just how very proud the inhabitants of George Town are with the UNESCO award – they all have a map of all the main attractions and if they see that you do not have one, they will give you one!

The truth is that we were not able to do much the first day. We go there late (roughly around 6pm) and then we had to find the hostel, leave the stuff,etc. Before we knew it, it was dinner time, so we headed for  an Indian restaurant which was close by. Amazing food, eaten on a banana leaf and with my hands.

We made up for the lack of sightseeing the next day and saw some really cool things:

One day is more than enough for George Town, but we needed the extra afternoon to plan where to go next, one of the dilemmas of backpacking. The truth is that we had wanted to go inland to Cameron Highlands or Taman Negara, but the monsoon made it very difficult (and dangerous). We chose on an alternative pretty quickly: book 2 seats to go on a mini bus to the Perenthian Islands to spend some time to learn how to scuba dive. We were going to be greeted by a very early driver at 5am, with this in mind, we “closed off the day” quickly and went to bed.

After 5 hours in a minibus and another hour in a speed boat, we finally arrived to the biggest island (Besar), where we were booked for the following five nights. For such a paradisiacal place, it looked awfully empty: the island has only 3-4 hotels and that’s all. Behind them, it’s all about the jungle. Thank God we were there to dive, otherwise those would have been very long days! Don’t get me wrong, it’s a stunning place, but there’s only so much lounging or reading that you can do 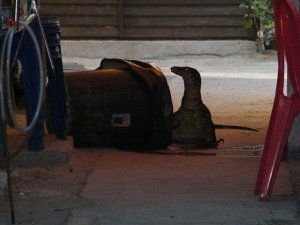 We had some fun too, though! On the first day, just after arriving, we decided to go out and explore, which we always do. Of course in this case, it meant trying to close the jungle to see what was on the other side of the island. Twenty minutes in, we heard a suspicious noise and looked to our left only to see a 2 metre long Komodo like dragon running away from us scared (can you believe that??)… Not sure if it was the same dragon or not, but later on that same day we saw one eating of the hotel’s bin – you should have seen the waiter, he was so scared!

The best thing out of those 4 days was, without a shadow of a doubt, the diving. It’s difficult in the beginning, but so mind-blowing at the same time. Before you are allowed to dive, you have to go through a lot of theory and watch a rather long and boring video. Despite that, we still managed to dive the afternoon of the first day. We went to Shark Point, where we saw everything: black tip sharks, turtles, coral, angel fish, clown fish, moray eels… It was such an amazing dive that even the instructor said that we had probably had the best there was to have. The following 2 days, did not have the same impact on us, but the confidence that we got the more time we were in the water was great. To be able to comfortably swim, observe and be able to breathe with no issues was fantastic.

The day we were leaving, we had to get up mad early to get the speed boat back to the mainland (Kuala Besut), to then get a taxi to Johor Bahru’s airport  to fly to KL and then from there to Singapore. Sounds complicated? Yes, it does, and it also meant that we were saving a ton of money too (surprisingly!)

But enough for today – next post entry will be from Singapore. Until then…